I was more than ready for the Saturday afternoon game between the Devils and Flyers. After hanging out at Xfinity Live! for a bit, we took the short frigid walk to Wells Fargo Center. The last time I was here, it was known as the First Union Center. The Wells Fargo Center lies at the southwest corner of the South Philadelphia Sports Complex, which includes Lincoln Financial Field and Citizens Bank Park.

Upon entering, I wanted to walk around a bit and grab a beer before heading to our seats.

We saw a small Goose Island kiosk offering a couple draft beers. The stand was near the entrance and it was so cold and windy. I had to give the woman props, but I’m sure it was keeping the beer nice and cold.

I tried the Winter Experimental Ale. I’ve never seen it before and I’m all about trying new things. It had a slightly sweet caramel aroma and tasted of roasted malt.

With an extra cold beer in hand, it was time to see the seats. They were pretty awesome. About 18 rows from the ice and where the Devils shoot twice. We sat next to who previously lived in central Jersey and now live in Philly. It’s always a plus when you’re seated next to fellow fans at an away game. 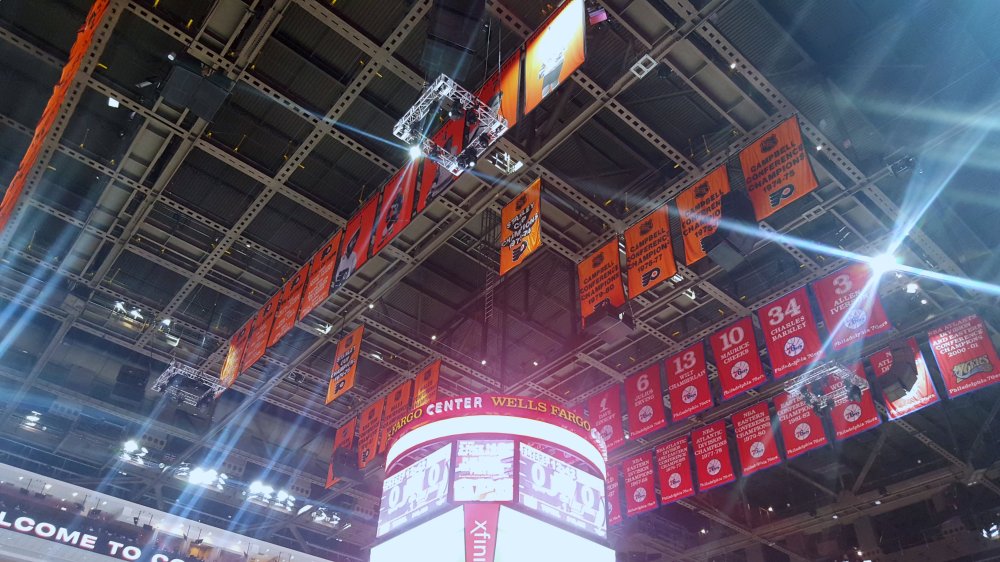 The Devils struck first and a goal from Blandisi put them up 1-0.

If I was only going to try one food in this arena, it was going to be the Crab Fries from Chickie’s & Pete’s. This Philadelphia sports bar chain has been serving crab-heavy items along with those famous fries since 1977.

The line was long, but it was moving. Besides their signature fries, the stand offered chicken fingers and chicken sandwiches as well.

I ordered the fries which came with a couple small cups of the creamy white cheese sauce. The period was about to start and I had to get back to my seat!

How good could these actually be? They were amazing! The line was long for a reason and I finally tasted why. The crinkle-cut fries were hot and crispy, and seasoned with Old Bay. So simple, but so good. Dip it in that cheese sauce and you have the perfect salty snack for a game and a cold beer. The only thing that was disappointing was the fact that I only bought one. Damn.

Before the start of the last period, I headed to the store to buy a Flyers puck. It felt super weird, but I need to start a collection of pucks for every arena I’ve been too.

The Flyers ended up tying the game 1-1 in the 3rd. The period came to an end and it was time for overtime!

After only a couple minutes, Henrique scored the game-winning goal! All my other fellow Devils fans were cheering loud and proud along with me. A win is always nice, but it’s even better on rival’s ice.

After the game, we headed back to Xfinity Live! for a couple more drinks. It seemed like everybody had the same idea. After drinks, I could head out for a cheesesteak with a smile on my face.