After dinner, I walked around the corner and up the block to barmini by José Andrés. This swanky cocktail bar features an innovative menu of unique drinks and snacks. It all started over 15 years ago when the renowned chef created the Salt Air Margarita at his Nuevo Latino restaurant, Café Atlántico. Today, José pays homage to the golden era of cocktails at barmini, a hub of chef-driven libations that serves as a cocktail lab for all of his restaurants and projects.

I made a reservation online. They’re fully booked most nights, but may accept walk-ins if there’s availability. I strongly suggest making a reservation on the website ahead of time to avoid disappointment. Upon entering, I was shown in and welcomed with a smile.

I was seated near the door and instantly loved the open layout of the bar. You can see everything. The room was fairly bright with white furnishings. They have a few tables for larger parties as well. It’s a lively atmosphere.

After a couple minutes, I was served a welcome drink by the wonderful head bartender, José (Chuck). The small complimentary drink packed a punch, but was very refreshing. It got me even more excited for what was in store.

I was then handed a thick silver menu to look over. Cocktails are categorized according to type of liquor and there are a few small plates as well.

I saw the Cocktail Flight which was described as a selection of their most adventurous and innovative cocktails utilizing modern techniques and unique ingredients. Sold! I thought it was a great deal at $65 too.

He immediately started making the first cocktail, The Crossed Eye Mary, made with aged rum, lime, honey, and passion fruit espuma. An espuma is commonly used to make foams through the making of a stock, creating a gel and extruding through a nitrous oxide canister.

The cocktail had a citrusy taste to it and I liked the passion fruit espuma. It was like a slightly sweet whipped cream.

A large silver bowl and pitcher of liquid nitrogen was placed in front of me for the second cocktail.

The Nitrol Caipirinha is made with cachaça, lime, sugar, and LN2 (liquid nitrogen). Cachaça is a distilled spirit made from sugarcane juice. It is the most popular distilled alcoholic beverage in Brazil.

He placed the ingredients in the large bowl which received a few generous pours of liquid nitrogen transforming it into a semi frozen cocktail.

He placed a couple spoonfuls of the icy concoction into the glass and garnished it with freshly grated lime zest.

It was so refreshing. It was like a lime flavored Italian ice, but way better. You could taste the cachaça, but it was not overpowering. I easily finished it. No worries about this melting!

It was mesmerizing watching Chuck and the entire barmini team in action. 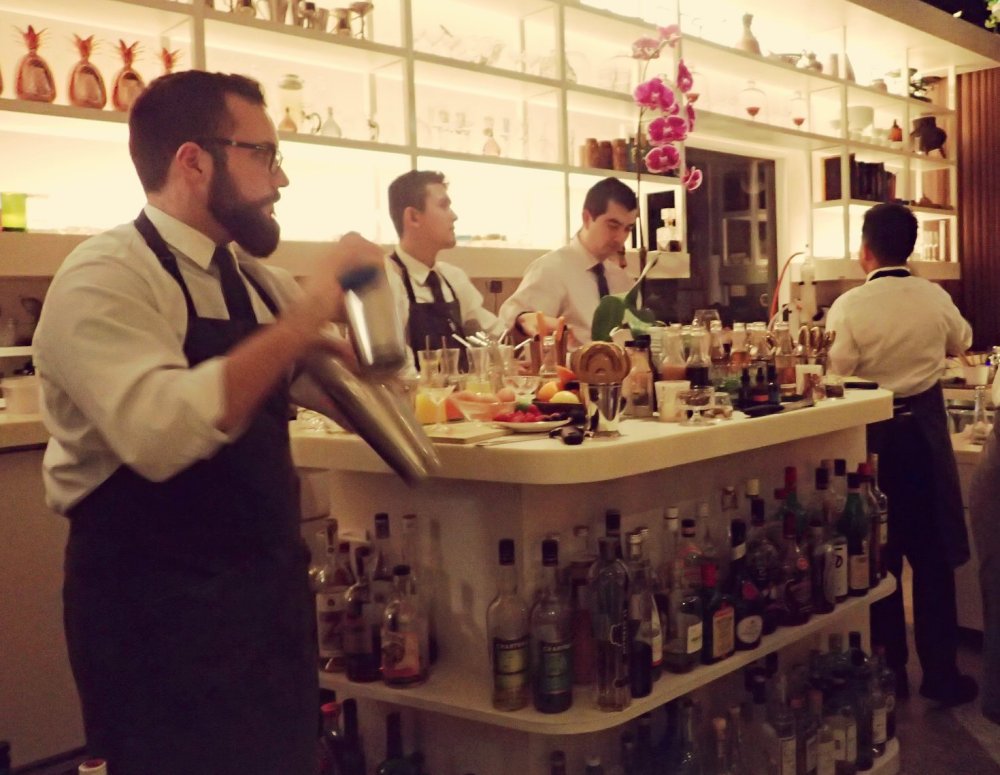 The Korean couple next to me seemed to be enjoying their drinks as well.

It was time for the third cocktail. A piece of wood, a micro torch and a small glass were placed in front of me this time. This should be interesting.

Chuck used the micro torch to burn a section of the cedar wood until there was enough smoke to trap inside the small glass.

Once the smoke inside the glass dissipated, he turned it over and placed an ice cube inside to make the Cedar & Agave, made with tequila anejo, benedictine, agave, and orange bitters. Benedictine is an herbal liqueur beverage developed by Alexandre Le Grand in the 19th century and produced in France. It is made of herbs, roots and sugar with a cognac base. It is very aromatic and has a very distinct taste.

With the glass taking on the woody aroma, he poured everything over the ice cube. 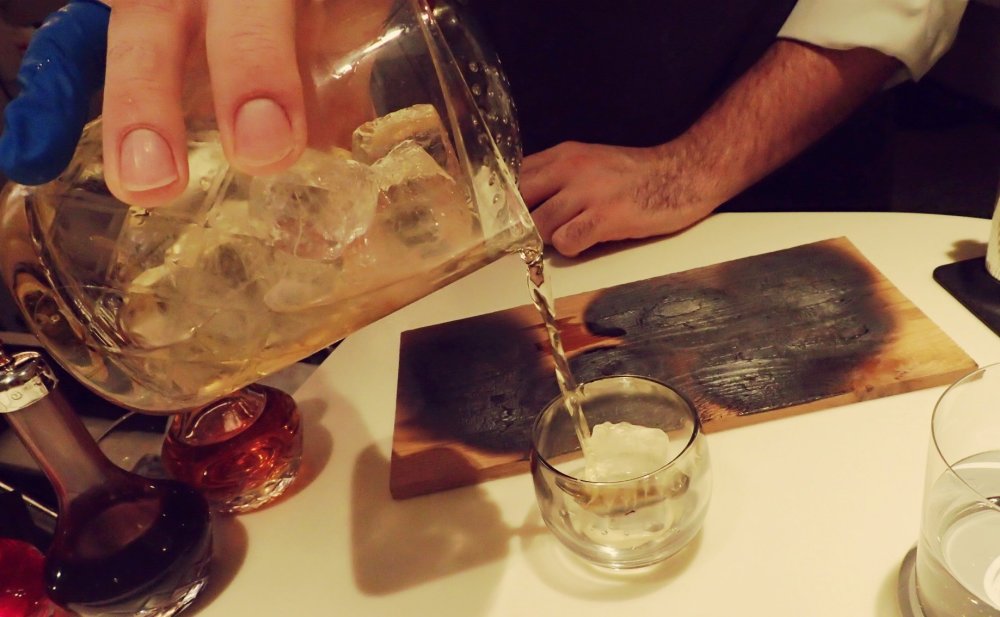 The cutest little flower was delicately placed on the ice cube as a garnish.

This cocktail had some bold flavors. You get a smoky flavor from the cedar smoke and a woody taste from the tequila anejo. It was slightly bitter, but the agave added a tiny bit of needed sweetness.

This was definitely a sipping drink. It was excellent. I probably should have passed on those pisco sours at dinner. Oh well.

Break out the beaker, it’s time for the fourth cocktail!

A glass of blue liquid was topped with a carefully placed flower using tweezers. He then grabbed what looked like a perfume bottle. Okay, you have my attention once again.

The glass was placed closer to me and received a couple quick spritzes of the bottled liquid.

The blue concoction magically turned purple right before my eyes. Very cool! This was the Divine Wind made with shochu, orange liqueur, butterfly pea, lime, and yuzu. Butterfly pea is a purple flower, so it seems like flower garnishes may vary. Apparently, this was an 80’s inspired cocktail. I dig it.

Chuck kept busy constantly making cocktails for others at the bar and tables, but always checked up on me and provided a personal experience.

The fifth cocktail was the Floral Cloud. I could see why it was named that after watching heaps of “fog” being poured. It was made with gin, lemon, crème de violette, and maraschino. Maraschino is a strong, sweet liqueur from the city of Torreglia made from the distillation of Marasca cherries. Crème de violette is a liqueur with violet flower flavoring and coloring with either a brandy base, a neutral spirit base, or a combination of the two. It has a distinctly floral and sweet aroma and taste. Ah, Floral Cloud, it all makes sense now.

This drink was on the lighter side and I really enjoyed it. The neutral gin allowed the other flavors to shine through.

It was fresh, well-balanced, and gone in a few gulps. 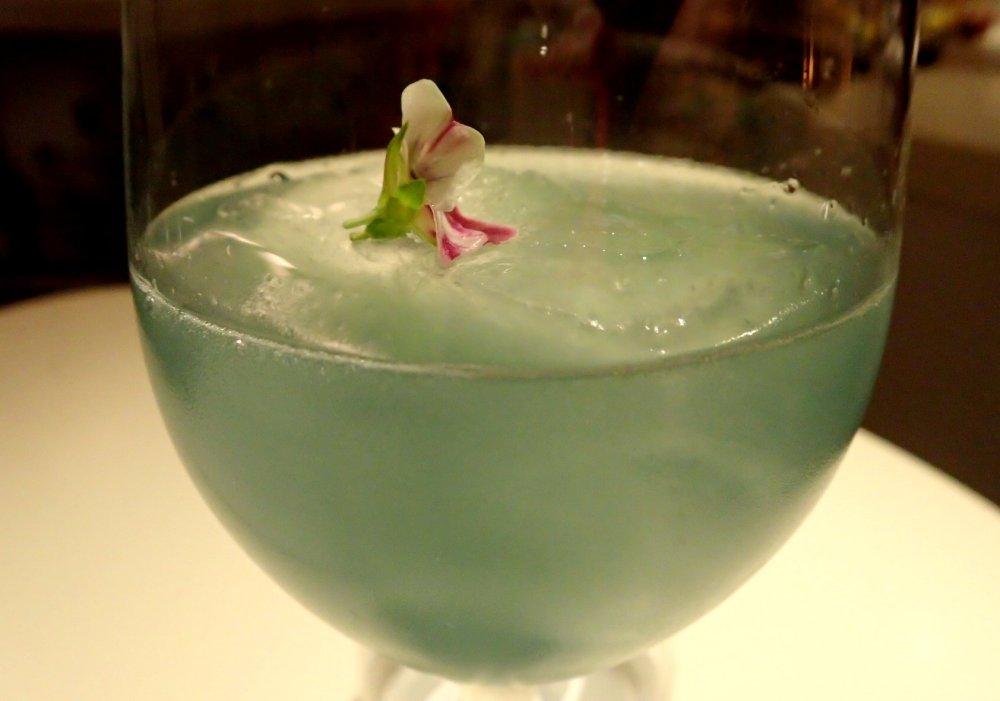 There was no surprise I was developing a nice buzz after awhile. It was time for a Barmini snack! I decided to try the Grilled Cheese made with valdeon, brie, white cheddar, bonne bouche, and truffle. Valdeon is a Spanish blue cheese and bonne bouche is a is an aged goat’s milk cheese made by Vermont Creamery. In true José Andrés style, this was not your ordinary grilled cheese sandwich.

The cheese was creamy and flavorful with tasty bursts of that distinct truffle flavor. The bread was buttery and perfectly crisp. It was served with a honey mustard dipping sauce. Delicious.

I wasn’t finished yet. It was time for another cocktail! The Carmen Miranda was made with banana bourbon, cinnamon, sugar, and angostura. Angostura is a concentrated bitters made of water, ethanol, gentian root, herbs and spices. It’s made by House of Angostura in Trinidad and Tobago and used to flavor beverages or food.

It was like a sweeter version of an Old Fashioned. I enjoyed it.

The cocktail flight concluded with a Mojito Sphere. I recognized this sphere-like morsel since it has been used for other sweet and savory flavors at other restaurants around the world. It instantly burst in my mouth and I savored the cool refreshing flavors of the white rum, mint and lime.

Since I had a fairly late reservation, I didn’t have to worry about anybody waiting for my seat and decided to have one last cocktail. First, it was off to the ladies room.

Even the short trip to the bathroom was filled with clever details. You don’t have to worry about running out of toilet paper, that’s for sure.

For my last cocktail, I had Chuck make me something, his choice. I mentioned I preferred something light, but not too sweet. He delivered. I don’t remember what was in it, but it was delish and a great way to end my first night in DC.

The bill arrived in a pill capsule. Surprisingly, the price was not hard to swallow and I thought it was reasonable for the experience and quality. The cocktail flight was wonderful and I enjoyed every single drink. The half serving of each was a satisfying amount and I truly appreciated the innovative techniques of each unique cocktail. It was the perfect way to experience barmini. I would definitely come back to try something else off their fairly extensive menu. Service was excellent. Thank you, Chuck!